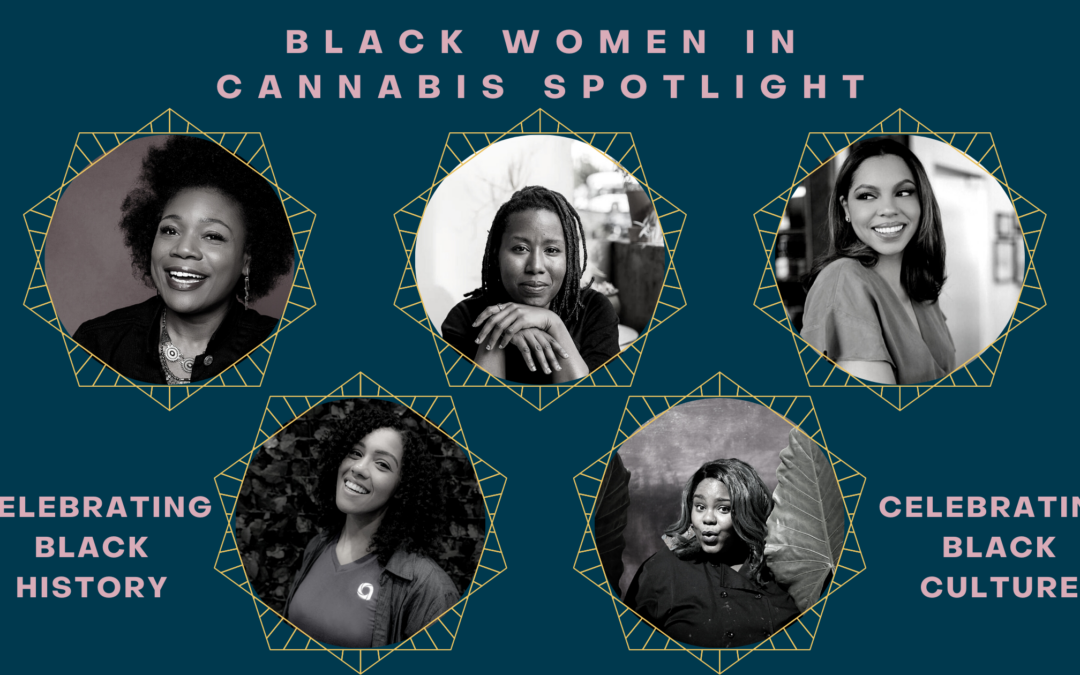 As we celebrate Black History Month this February, we’re taking some time to highlight five black women who are challenging cannabis industry norms. The role and sacrifices of black Americans have helped shape the evolving landscape of marijuana legalization in America.  In honor of those who have faced discrimination, incarceration, and other injustices throughout the tumultuous decades of cannabis criminalization, we are featuring 5 black women who have stood up to challenge the norm of the predominantly white male cannabis industry and continue to support and lift up the communities they serve. Between new inventions, legislation advocacy, marketing, and education, these women should be known and celebrated for their accomplishments.

Dasheeda Dawson has been an advocate for legal marijuana in New York for many years and was actively involved with the state’s cannabis legalization in 2020.

Dawson is also the author and founder of The Weed Head Co. and the cohost of She Blaze, female-run cannabis news and culture podcast. Dasheeda believes that when national legalization is on the table, it must be rooted in racial and economic equity. The New York bill she helped pass sets a great example of providing access to education, entrepreneurship opportunities, and financial support to those impacted by the war on drugs.  During legalization, Dasheeda advocated for providing 40% of taxes collected on cannabis be given directly to black communities in New York and was successful in doing so.

“I believe that a national legal marijuana industry rooted in racial and economic equity is imminent.” – Dasheeda Dawson

Shanel Lindsay is a STEM icon as far as we’re concerned. This Massachusetts native is the Founder, Inventor, and CEO of Ardent LLC a 3-in-1 cannabis kitchen tool. This Boston-based company features compact, user-friendly decarboxylation products made for ease in the infusion process as well as keeping the room smell-free (that’s science talk for making weed oil or butter). All of these perks have made Ardent a household cannabis name. Over 10 years ago, Shanel first began using cannabis to treat an ovarian cyst causing severe discomfort. Her discoveries led her to topical applications and edibles. Shanel began trying every old-school way to extract cannabinoids like THC and CBD but the accuracy of doses fell flat every time. She was determined to find a solution and tested every possible extraction method, eventually teaming up with the state-certified lab, MCR, for the creation of Ardent.

Hope Wiseman has made a name for herself as the youngest person to open a dispensary in America. Wisemans’s journey began in 2014 when Maryland legalized medical marijuana. Once announced, she hit the ground running in hopes to open her own medical marijuana dispensary. In 2018, she did just that opening the doors of Mary and Main when she was just 25 years old.

“It’s hard to get into the industry no matter who you are. Being a Black person and being a young woman only exacerbates the challenges. I am constantly being looked at as not as qualified. I think a lot of Black people already have that image in business, and then you add on being a woman.” – Hope Wiseman

Megon Dee has made an impressive impact on the cannabis industry as a weed chef, education consultant, and co-founder of Oracle Infused, a CBD wellness care brand. Before cannabis was legal, Dee was charged with several cannabis-related crimes. She has since expunged these charges and has relocated to Oregon, to continue her work. As a cannabis chef, Dee has the important job of educating others on edibles dosage and cannabinoids. She also developed Cannacademy, a free online course about cannabis science.

Tsion Lencho is a Stanford Law Graduate, the first Vice President of Legal Affairs for Flow Kana (and only black executive in the organization), and co-founder of Supernova Women, a networking platform for women of color interested in taking the leap into the cannabis industry. Supernova Women focuses on advocating for those disproportionately affected by the over-policing and systemic racism black cannabis users have faced for centuries. Supernova Women made huge strides to establish social equity programs in Oakland and San Francisco, California. The organization has also created The Workforce Development Program with help from California’s Bureau of Cannabis Control to place people of color into non-entry level positions. Participants receive online training followed by hands-on training to prepare them for jobs in manufacturing and compliance.

We are truly inspired by these amazing women and all they have done to break barriers for the industry as well as barriers in the industry. It is our duty to uplift black women and men through this transitional time in the industry and teach others about all that’s been accomplished. Casual cannabis consumption can only be a conversation when black men and women are a part of it.