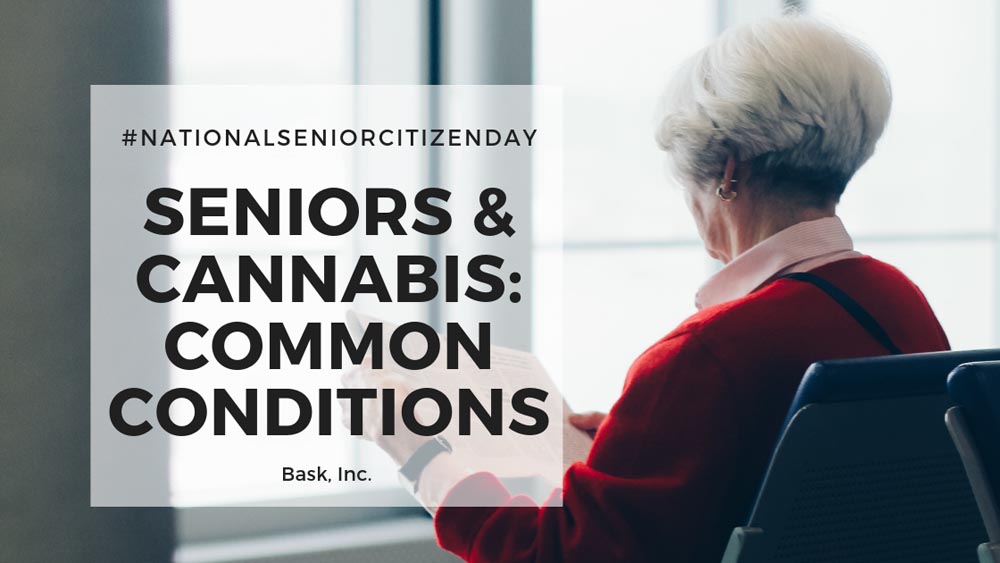 Seniors offer a wealth of knowledge and experience to our communities. Some are Veterans, civil rights activists, mothers, fathers, and they are the fastest growing population of cannabis users, according to a recent survey. So what’s causing the change of perception around cannabis following years of prohibition and stigma? Many seniors are choosing to try cannabis as a more natural medicine and a means of replacing prescription medications, including harmful and addictive opioids.

Seniors make up less than 15% of the U.S. population; however, they’re prescribed more than 1/3 of all prescription drugs. According to a 20-year study conducted by the National Health and Nutrition Examination Survey, “Contemporary older adults on multiple medications have worse health status compared with those on less medications, and appear to be a vulnerable population.” The opioid epidemic is affecting increasing numbers of seniors as doctors continue to prescribe opioids, sometimes multiple different opioids at once, for seniors dealing with conditions like chronic pain and arthritis.

5 Medical Conditions for Which Seniors Are Using Medical Cannabis

Chronic pain is a condition that can last from several days to a lifetime and often contributes to poor quality of life for those suffering.  The most commonly reported conditions of chronic pain within the senior population are lower back pain, arthritis and inflammation. Studies show cannabis can relieve symptoms of chronic pain and arthritis by interacting synergistically with our endocannabinoid system. Both THC and CBD, the active ingredients in cannabis, react with our CB1 and CB2 receptors in our bodies and both show anti-inflammatory properties that suppress pain. Many patients find cannabis relieves pain and arthritis through various methods of consumption including edibles, tinctures, and topicals.

Seniors often report symptoms of anxiety and/or depression as a result of the many complexities of aging. Sometimes anxiety is a result of the fear of aging, dealing with other medical conditions, or the rapidly changing environment we live in. Many seniors also face isolation following the loss of a spouse or living away from close relatives.  PTSD is also a common condition among the senior Veteran population. Often, doctors will prescribe medications like antidepressants and opioids to combat mental health disorders; however, these medications can be highly addictive and harmful to our bodies.

As a result, some seniors are turning to medical cannabis for anxiety and/or depression relief.  Why? Because cannabis acts as a natural mood enhancer by activating serotonin receptors. Serotonin is commonly referred to as “the happy chemical” due to its contribution to happiness.  According to studies, it’s believed to help “regulate mood and social behavior, appetite and digestion, sleep, memory, and sexual desire and function.”

Studies have shown that the cannabinoids THC and CBD can help patients with PTSD, “by preventing the retrieval of the underlying trauma, effectively preventing traumatic memories and nightmares, while also helping attain emotional wellbeing. This has made it a popular treatment for PTSD patients, of which many are combat veterans.”  Veterans organization Alternative Treatment for Veterans and cannabis research group Cannabis Community Care Research Network (C3RN) are conducting a an anonymous research survey to learn more about Veterans use of cannabis for conditions including PTSD. The goal of this anonymous study is to understand Veterans access to using cannabis so they may shape cannabis policy and increase affordable access to medical cannabis for Veterans.

Sleep disorders among seniors are very common and often lead to prescription medication use. Certain medical conditions, such as Parkinson’s disease, Alzheimer’s disease, and chronic pain can lead to sleep disorders while anxiety can also reduce sleep quality. A major concern for seniors with sleep disorders is that lack of sleep will put them at risk of falling or trouble staying awake during the day. Patients report cannabis can be effective for treating sleep disorders due to its relaxing and sedative properties.

According to a study conducted in 2008, products with high levels of THC reduces REM sleep, which is the portion of the sleep cycle responsible for dreams. For seniors with PTSD, cannabis has shown to help with sleep disorders by reducing nightmares and, therefore, improving quality of sleep. A study in 2009 found 72% of Veterans with PTSD reported better sleep with cannabis use.

It’s important to understand what products or cannabis varietals to choose for sleep disorders because some products may induce stimulation and produce energizing effects while others may aid sleep and relaxation. Before making a decision, we suggest talking to a Patient Advocate to understand the different products available and to learn about how different cannabinoids and terpenes can produce different effects.

Parkinson’s Disease is a nervous system disorder that affects movement and is most known for tremors or shaking of the limbs. The cause of Parkinson’s disease is currently unknown; however, doctors believe it could be caused by genetic mutations or exposure to environmental toxins. Some patients have reported cannabis is an effective treatment for reducing tremors caused by Parikinson’s; however, research is limited at this time.  Some doctors are suggesting the use of cannabis due to its neuroprotective properties, which could save neurons from the damaging effects of Parkinson’s. It is best to talk with a doctor about adding cannabis to your treatment plan. A list of local cannabis physicians can be found here.

As adults age, some begin to experience declining cognitive health leading to memory loss, disrupted ability to think clearly, and other cognitive disorders.  Dementia and Alzheimer’s disease are two cognitive disorders that pose a major concern for the senior population. At this time, there is no cure for Dementia or Alzheimer’s and researchers are still searching to find the cause of these conditions. In 2018, researchers reported that THC reduced symptoms similar to Alzheimer’s in mice after 6 weeks of receiving the substance. According to one of the researchers, Yvonne Bouter,  “cannabis could be beneficial for Alzheimer’s disease.” At Bask, we frequently hear from patients who are seniors that they have noticed an improvement in cognitive health and overall quality of life. A study of Bask patients conducted by C3RN in 2018 found that 81% of Bask patients report that cannabis generally helps with quality of life.

Seniors and Cannabis: Becoming a Patient

These are just a few of the conditions for which seniors are using medical cannabis. If you’re interested in becoming a Massachusetts Medical Cannabis Patient, we suggest reading the resources we have aviailable on our website here. It’s important to speak with your doctor or a doctor registered with the MA Medical Use of Cannabis program before using cannabis.  Once registered as a patient, we suggest meeting with one of our Patient Educators to learn more about the different products and methods of consumption available.

Please consume responsibly. This product may cause impairment and may be habit forming. Marijuana can impair concentration, coordination and judgment. Do not operate a vehicle or machinery under the influence of this drug.This product has not been analyzed or approved by the Food and Drug Administration (FDA). There is limited information on the side effects of using this product, and there may be associated health risks. Marijuana use during pregnancy and breast-feeding may pose potential harms. It is against the law to drive or operate machinery when under the influence of this product. KEEP THIS PRODUCT AWAY FROM CHILDREN. There may be health risks associated with consumption of this product. Marijuana can impair concentration, coordination, and judgment. The impairment effects of edible marijuana may be delayed by two hours or more. In case of accidental ingestion, contact poison control hotline 1-800-222-1222 or 9-1-1. This product may be illegal outside of MA.