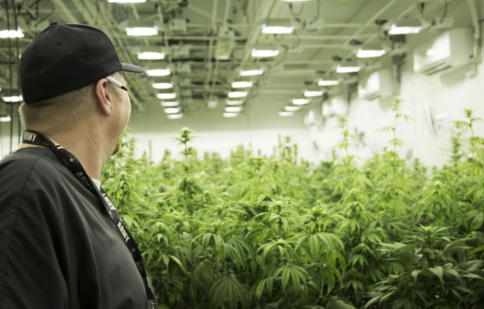 Eventually, BASK intends to open doors seven days a week with a staff of roughly 30 full-time employees. When that transition happens, according to Keogh, will depend on inventory. He says that since the announcement that the dispensary would begin accepting appointments last week BASK has “had quite a bit of activity on the site.”

The dispensary has had state approval to commence sales since the end of December. Since, the transition from Coastal Compassion to BASK happened, along with preparations for doors to open. During this time, employees were commencing mock sales, curating and receiving packaging, as well as pre-packaging the product for sale.

Keogh refers to the period from late December until now as a “bit of a blur.”

“In the last month we’ve gone through the branding, the logo, the color scheme, into a format that’s compliant with state packaging, out to the printer, back in from the printer, on to packing, so there was that whole piece,” said Keogh, before detailing more of the process, which included getting the website ready for launch and gathering patient education materials.

Aside from some wholesale edible or topical products, all cannabis is grown in-house at BASK. According to the dispensary’s website, the menu will change daily and feature options including the cannabis flower, pre-rolled joints, edibles, and rosin.

Be The First To Hear About Our Sales!

When a sale runs, our inventory goes fast! Get ahead of the crowd by signing up to our email list and getting news delivered directly to your inbox.

You have Successfully Subscribed!